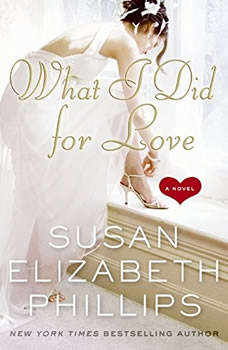 What I Did for Love

“Writing with both sharp wit and terrific emotional warmth, Phillips delivers another of her supremely satisfying contemporary romances.”—Chicago Tribune Perennial New York Times bestselling author Susan Elizabeth Phillips is easily one of the most beloved authors of women’s fiction in America—and with her wonderfully witty What I Did for Love, she works her magic once again. Turning her satirical eye on Hollywood and the messy love triangles of its major superstars (think Jennifer Aniston, Brad Pitt, and Angelina Jolie), the incomparable Susan delivers a treasure of a romantic comedy that the Detroit Free Press calls “a laugh-out-loud tale,” and Publishers Weekly calls a “massively entertaining romp.” Read What I Did for Love and discover why Susan Elizabeth Phillips has won more Favorite Book of the Year Awards from the Romance Writers of America than any other author, including Nora Roberts.

Knit the Season
by Kate Jacobs

A new heartwarming novel from the #1 New York Times- bestselling author. Knit the Season is a loving, moving, laugh-out-loud celebration of special times with friends and family. The story begins a year after the end of Knit Two, with Dakota Walke...