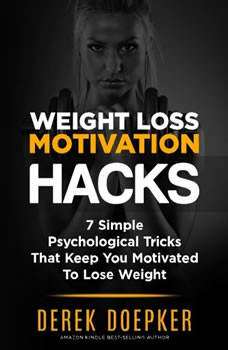 Do you feel like you're fighting a losing battle with yourself to get motivated to lose weight? Unfortunately, many people will never reach their weight loss goals simply because they can't figure out how to get themselves motivated enough to stick to their resolutions. But what if you could simply reprogram your brain with powerful psychological "mind-hacks" to create unstoppable motivation on-demand, and finally reach your weight loss goals with ease? Derek Doepker reveals what years' worth of psychological research has shown to be hands-down the most effective methods of transforming your habits. You're about to discover: - The biggest myth of motivation. When you discover this trap almost everyone falls into, you'll realize why you could never get yourself motivated before. - The six human needs that dictate all human behavior. When you map out your behavior blueprint, you'll be able to flip a switch to have die-hard passion for things you previously hated doing. - How more than 90% of people who lose weight dieting gain it all back, and what you can do to make sure this never happens to you. - Why lack of willpower is almost never the reason people fail to stick to their weight loss goals. You'll discover a force stronger than willpower that can virtually guarantee you'll never fail again. - How to avoid the misery of boring diet and exercise programs and make the entire process of weight loss not only fun, but downright addicting. - A trick research has shown can help stop food cravings dead in their tracks. Note: This technique is so powerful, it's being used to successfully help smokers quit for good. - And more!

Caught Me A Big'Un...And then I Let Him Go!
by Jimmy Houston

One of the best-known, most-loved TV fishing personalities, Jimmy Houston has become a bass legend. Two-time winner of the B.A.S.S. Angler of the Year award, Jimmy now brings you A of the wonderful, entertaining, and instructive stories he's gathere...