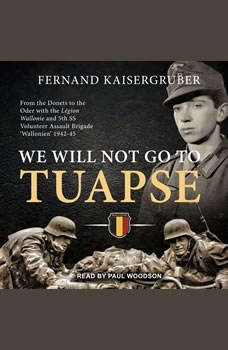 We Will Not Go to Tuapse: From the Donets to the Oder with the Legion Wallonie and 5th SS Volunteer Assault Brigade 'Wallonien' 1942-45

Until recent years, very little was known of the tens of thousands of foreign nationals from Norway, Denmark, Holland, Belgium, France, and Spain who served voluntarily in the military formations of the German Army and the German Waffen-SS. In Kaisergruber's book, the listener discovers important issues of collaboration, the apparent contributions of the volunteers to the German war effort, their varied experiences, their motives, the attitude of the German High Command and bureaucracy, and the reaction to these in the occupied countries. The combat experiences of the Walloons echoed those of the very best volunteer units of the Waffen-SS, although they shared equally in the collapse of the Third Reich in May, 1945. Although unapologetic for his service, Kaisergruber makes no special claims for the German cause and writes not from any postwar apologia and dogma, but instead from his firsthand observations as a young man experiencing war for the first time, extending far beyond what had been imaginable at the time. His observations of fellow soldiers, commanders, Russian civilians, and the battlefields prove poignant and telling.