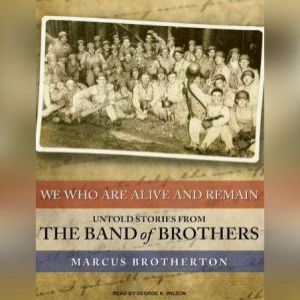 We Who Are Alive and Remain: Untold Stories from the Band of Brothers

They were the men of the now-legendary Easy Company. After almost two years of hard training, they parachuted into Normandy on D-Day and, later, Operation Market Garden. They fought their way through Belgium, France, and Germany, survived overwhelming odds, liberated concentration camps, and drank a victory toast in April 1945 at Hitler's hideout in the Alps. Here, revealed for the first time, are stories of war, sacrifice, and courage as experienced by one of the most revered combat units in military history. In We Who Are Alive and Remain, twenty men who were there and are alive today—and the families of three deceased others—recount the horrors and the victories, the bonds they made, the tears and blood they shed, and the brothers they lost.