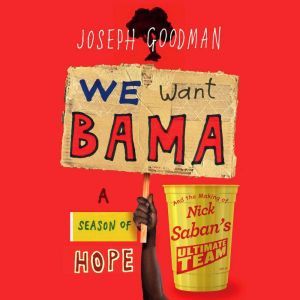 We Want Bama: A Season of Hope and the Making of Nick Saban's "Ultimate Team"

A lively chronicle of how the 2020 Crimson Tide became Nick Saban’s “ultimate team.”

Was Alabama’s Crimson Tide in 2020 the greatest team of all time? The squad went 13-0 in a pandemic year, scored a combined 107 points against SEC powerhouses LSU and Florida, crushed Ohio State in a National Championship Game 52-24 in a contest that wasn’t even that close, and followed it up with another top-rated signing class.

Nick Saban called his boys the “ultimate team,” but it wasn’t just because they kicked the ever-living hell out of everyone on the football field. It was because the team leveraged a power and influence born of Southern pride to push back against a hateful legacy of racism that a populist president was exploiting to divide the nation. At a time when Americans needed real leaders in the face of so much hate, the sports world answered the call and fought back for the soul of the country.

In the summer of 2020, the Tide players left their training facility and, led by their celebrated coach, marched to a campus doorway made infamous sixty years earlier by another political demagogue and showed what people can accomplish when they fight together for a just cause in the name of unity. The most powerful force in a state crazy for college football had chosen to make a stand and replace George Wallace’s “Segregation forever!” with a different message, written by one of the players: “All lives can’t matter until Black lives matter.”
​
There have been some great football teams through the years, and they all deserve respect. But here’s what we know for sure: They all would have been appreciative of what this Alabama team represented, and proud of what it accomplished. The Crimson Tide in 2020 captured something special that moved it beyond the conversation of best ever, and into the place reserved for most important of all time.