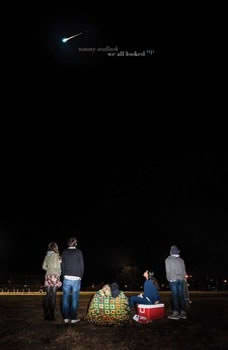 We All Looked Up

Four high school seniors put their hopes, hearts, and humanity on the line as an asteroid hurtles toward Earth in this contemporary novel.They always say that high school is the best time of your life. Peter, the star basketball player at his school, is worried “they” might actually be right. Meanwhile Eliza can’t wait to escape Seattle—and her reputation—and perfect-on-paper Anita wonders if admission to Princeton is worth the price of abandoning her real dreams. Andy, for his part, doesn’t understand all the fuss about college and career—the future can wait. Or can it? Because it turns out the future is hurtling through space with the potential to wipe out life on Earth. As these four seniors—along with the rest of the planet—wait to see what damage an asteroid will cause, they must abandon all thoughts of the future and decide how they’re going to spend what remains of the present.