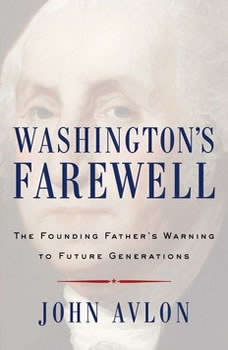 “A vivid portrait…A thoughtful consideration of Washington’s wisdom that couldn’t be timelier.” —Kirkus Reviews (starred review) George Washington’s Farewell Address was a prophetic letter from a “parting friend” to his fellow citizens about the forces he feared could destroy our democracy: hyper-partisanship, excessive debt, and foreign wars.Once celebrated as civic scripture, more widely reprinted than the Declaration of Independence, the Farewell Address is now almost forgotten. Its message remains starkly relevant. In Washington’s Farewell, John Avlon offers a stunning portrait of our first president and his battle to save America from self-destruction. At the end of his second term, Washington surprised Americans by publishing his Farewell message in a newspaper. The President called for unity among “citizens by birth or choice,” advocated moderation, defended religious pluralism, proposed a foreign policy of independence (not isolation), and proposed that education is essential to democracy. He established the precedent for the peaceful transfer of power. Washington’s urgent message was adopted by Jefferson after years of opposition and quoted by Lincoln in defense of the Union. Woodrow Wilson invoked it for nation-building; Eisenhower for Cold War; Reagan for religion. Now the Farewell Address may inspire a new generation to re-center our politics and reunite our nation through the lessons rooted in Washington’s experience. As John Avlon describes the perilous state of the new nation that Washington was preparing to leave as its leader, with enduring wisdom, he reveals him to be the indispensable Founding Father.