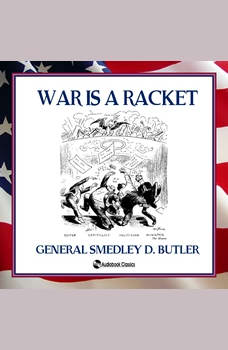 War is a Racket

After his retirement from the Marine Corps in the early 1930's, General Smedley D. Butler embarked on a national lecture tour, where he gave his speech about how commercial interests benefit from war. The speech was well received and he wrote an expanded version of it, which was published as War Is A Racket. The work was published by Reader's Digest as a condensed book supplement, which added to its popularity.The book consists of five chapters. The first chapter cites telling statistics: 21,000 people became millionaires and billionaires during the war; 4 million men served; the growth of national debt by a factor of 25 from 1898 to 1918. The second chapter details the level of profits made by many major U.S. corporations made in the years preceding World War I and compares them to the significantly greater profits made from and during the war. The third chapter lays bare the ways in which the costs are borne by the public, with particular focus on humiliating deductions from the pay of soldiers. Chapter four sets forth three simple methods to limit wars: insist that everyone in the war economy earn the same income as that of the soldiers; conduct a vote to decide whether or not to go to war and limit the voters to those who would serve; limit appropriations and activities to strictly defensive measures. The final chapter shows the futility of arms limitations negotiations and makes it plain that only total disarmament will break the back of the beast.