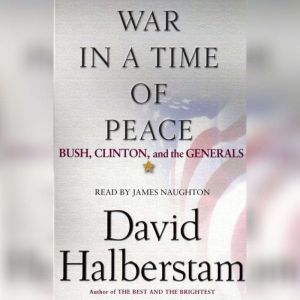 War in a Time of Peace: Bush, Clinton, and the Generals

In this long awaited successor to his #1 national bestseller The Best and the Brightest, David Halberstam describes in fascinating human detail how the shadow of Cold War Vietnam still hangs over American foreign policy, and how domestic politics have determined our role as a world power. Halberstam brilliantly evokes the internecine conflicts, the untrammeled egos, and the struggles for dominance among the key figures in the White House, the State department, and the military. He shows how the Vietnam war has shaped American politics and policy makers. Perhaps most notable is what happened under Clinton when, for the first time in fifty years, a president placed domestic issues over foreign policy. With his uncanny ability to find the real story behind the headlines, Halberstam shows how current events in the Balkans and Somalia act as a fascinating mirror to American politics and foreign policy Sweeping in scope and impressive in its depth, War in a Time of Peace provides fascinating portraits of Clinton, Bush, Reagan, Kissinger, James Baker, Dick Cheney, Madeleine Albright, and others to reveal a stunning view of modern political America.