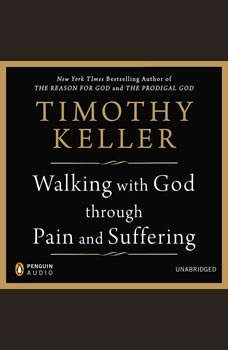 Walking with God through Pain and Suffering

New York Times bestselling author Timothy Keller—whose books have sold millions of copies to both religious and secular readers—explores one of the most difficult questions we must answer in our lives: Why is there pain and suffering?

Walking with God through Pain and Suffering is the definitive Christian book on why bad things happen and how we should respond to them. The question of why there is pain and suffering in the world has confounded every generation; yet there has not been a major book from a Christian perspective exploring why they exist for many years.

The two classics in this area are When Bad Things Happen to Good People by Rabbi Harold S. Kushner, which was published more than thirty years ago, and C. S. Lewis’s The Problem of Pain, published more than seventy years ago. The great secular book on the subject, Elisabeth Ku¨bler-Ross’s On Death and Dying, was first published in 1969. It’s time for a new understanding and perspective, and who better to tackle this complex subject than Timothy Keller?

As the pastor of Redeemer Presbyterian Church in Manhattan, Timothy Keller is known for the unique insights he shares, and his series of books has guided countless readers in their spiritual journeys. Walking with God through Pain and Suffering will bring a much-needed, fresh viewpoint on this important issue.

Every little girl has dreams of being swept up into a great adventure, of being the beautiful princess. Sadly, when women grow up, they are often swept up into a life filled merely with duty and demands. Many Christian women are tired, struggling un...

After decades of failed relationships and painful drama, Donald Miller decided he’d had enough. Impressing people wasn’t helping him connect with anyone. He’d built a life of public isolation, yet he dreamed of meaningful relations...