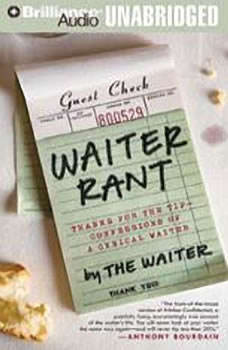 Waiter Rant: Thanks for the Tip - Confessions of a Cynical Waiter

According to The Waiter, eighty percent of customers are nice people just looking for something to eat. The remaining twenty percent, however, are socially maladjusted psychopaths. WAITER RANT offers the server’s unique point of view, replete with tales of customer stupidity, arrogant misbehavior, and unseen bits of human grace transpiring in the most unlikely places. Through outrageous stories, The Waiter reveals the secrets to getting good service, proper tipping etiquette, and how to keep him from spitting in your food. The Waiter also shares his ongoing struggle, at age thirty-eight, to figure out if he can finally leave the first job at which he’s really thrived. "The other shoe finally drops. The front-of-the-house version of Kitchen Confidential; a painfully funny, excruciatingly true-life account of the waiter’s life. As useful as it is entertaining. You will never look at your waiter the same way again–and will never tip less than 20%." --Anthony Bourdain, author of Kitchen Confidential "I really enjoyed WAITER RANT. The book is engaging and funny, a story told from my polar opposite perspective. I will now do my best to act better as a Chef -- and I dare say, I’ll never be rude to a waiter again, as long as I live."--John DeLucie, Chef of The Waverly Inn