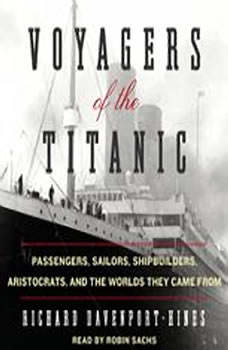 Voyagers of the Titanic: Passengers, Sailors, Shipbuilders, Aristocrats, and the Worlds They Came From

Late in the night of April 14, 1912, the mighty Titanic, a passenger liner traveling from Southampton, England, to New York City, struck an iceberg four hundred miles south of Newfoundland. Its sinking over the next two and a half hours brought the ship—mythological in name and size—one hundred years of infamy.Of the 2,240 people aboard the ship, 1,517 perished either by drowning or by freezing to death in the frigid North Atlantic waters. What followed the disaster was tantamount to a worldwide outpouring of grief: In New York, Paris, London, and other major cities, people lined the streets and crowded around the offices of the White Star Line, the Titanic’s shipping company, to inquire for news of their loved ones and for details about the lives of some of the famous people of their time. While many accounts of the Titanic’s voyage focus on the technical or mechanical aspects of why the ship sank, Voyagers of the Titanic follows the stories of the men, women, and children whose lives intersected on the vessel’s fateful last day, covering the full range of first, second, and third class­—from plutocrats and captains of industry to cobblers and tailors looking for a better life in America.Richard Davenport-Hines delves into the fascinating lives of those who ate, drank, reveled, dreamed, and died aboard the mythic ship: from John Jacob Astor IV, the wealthiest person on board, whose comportment that night was subject to speculation and gossip for years after the event, to Archibald Butt, the much-beloved military aide to Theodore Roosevelt and William Taft, who died helping others into the Titanic’s few lifeboats. With magnificent prose, Voyagers of the Titanic also brings to life the untold stories of the ship’s middle and third classes—clergymen, teachers, hoteliers, engineers, shopkeepers, counterjumpers, and clerks—each of whom had a story that not only illuminates the fascinating ship but also the times in which it sailed. In addition, Davenport-Hines explores the fascinating politics behind the Titanic’s creation, which involved larger-than-life figures such as J. P. Morgan, the ship’s owner, and Lord Pirrie, the ship’s builder.The memory of this tragedy still remains a part of the American psyche and Voyagers of the Titanic brings that clear night back to us with all of its drama and pathos.