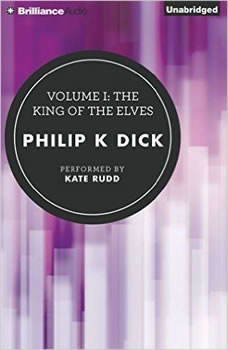 Volume I: The King of the Elves

Philip K. Dick (1928-1982) was one of the seminal figures of 20th century science fiction. His many stories and novels, which include such classics as The Man in the High Castle and Do Androids Dream of Electric Sheep?, reflect a deeply personal world view, exploring the fragile, multifarious nature of reality itself and examining those elements that make us—or fail to make us—fully human. He did as much as anyone to demolish the artificial barrier between genre fiction and "literature," and the best of his work has earned a permanent place in American popular culture.The King of the Elves is the opening installment of a uniform, five-volume edition of The Collected Stories of Philip K. Dick, expanded from the previous Collected Stories set to incorporate new story notes, and two added tales, one previously unpublished, and one uncollected. This generous collection contains 22 stories and novellas including Dick's first published story, "Beyond Lies the Wub," together with such landmark tales as "The Preserving Machine," in which an attempt to preserve our fragile cultural heritage takes an unexpected turn, The Variable Man, a brilliantly imagined novella encompassing war, time travel, and the varied uses of technology, and the title story, in which Shadrach Jones, owner of a dilapidated gas station in Colorado, stumbles into an ongoing war between trolls and elves, and encounters a fantastic—and utterly unexpected—destiny. Like the best of Dick's novels, these stories offer a wide variety of narrative and intellectual pleasures, and provide an ideal introduction to one of the singular imaginations of the modern era.