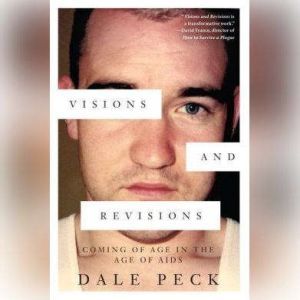 Part memoir, part extended essay, Visions and Revisions is a revolutionary look at the 1990s AIDS epidemic from "one of our most adventurous and singularly talented writers working today" (San Francisco Chronicle). Reminiscent of Joan Didion's "White Album" or Kurt Vonnegut's Palm Sunday, Visions and Revisionsis a collage-style portrait of a tumultuous era that puts the reader on the streets of NYC during the early 90s AIDS crisis, also touching on such diverse subjects as the serial murders of gay men, Peck's first loves upon coming out, and the transformation of LGBT people from marginal, idealistic fighters to their present place in a world of widespread, if fraught, mainstream acceptance. Visions and Revisionscapitalizes on a wave of increased interest in the HIV/AIDS epidemic, with the recent premiere of the groundbreaking AIDS documentary How to Survive a Plague. This is the first memoir by one of our most controversial contemporary writers, and it offers a jarring, street-level portrait of AIDS activism in the 1990s. Visions and Revisions will follow the Soho Press reissue of Dale Peck's debut novel, Martin and John, which received stunning critical praise, as well as our release of a new anthology he is editing. Novelist and critic Dale Peck's latest work--part memoir, part extended essay--is a foray into what the author calls "the second half of the first half AIDS epidemic," i.e., the period between 1987, when the AIDS Coalition to Unleash Power (ACT UP) was founded, and 1996, when the advent of combination therapy transformed AIDS from a virtual death sentence into a chronic manageable illness. Visions and Revisionshas been assembled from more than a dozen essays and articles that have been extensively rewritten and recombined to form a sweeping, collage-style portrait of a tumultuous era. Moving seamlessly from the lyrical to the analytical to the reportorial, Peck's story takes readers from the serial killings of gay men in New York, London and Milwaukee, through Peck's first loves upon coming out of the closet, to the transformation of LGBT people from marginal, idealistic fighters to their present place in a world of widespread, if fraught, mainstream acceptance. The narrative pays particular attention the words and deeds of AIDS activists, offering up a street-level portrait of ACT UP together with considerations of AIDS-centered fiction and criticism of the era, as well as intimate, sometimes elegiac portraits of artists, activists, and HIV-positive people Peck knew. Peck's fiery rhetoric against a government that sat on its hands for the first several years of the epidemic is tinged with the idealism of a young gay man discovering his political, artistic, and sexual identity. The result is a book that is as rich in ideas as it is in feeling. A visionary and indispensable work from one of America's most brilliant and controversial authors.