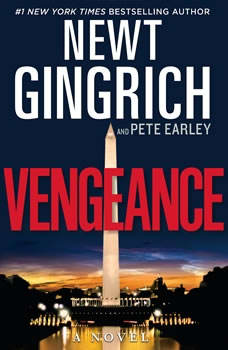 Leading politician and bestselling author Newt Gingrich and novelist Pete Earley are back with another gripping international thriller. A terrorist drives an explosive-packed rental truck into Major Brooke Grant's Washington, D.C., wedding, intending to detonate a deadly bomb. Saved by a last-minute fluke, Brooke seeks revenge against the master terrorist responsible, an international radical Islamist known only as the Falcon, who is determined to murder her, bring America to its knees, and create a modern-day caliphate. An unorthodox, newly sworn-in president recruits Brooke to join a clandestine CIA team in pursuit of the Falcon. With help from an odd coupling-a Saudi intelligence officer and an Israeli Mossad agent-Brooke goes after her elusive zealot nemesis. But before the trio can close in on their target, they discover that America's worst nightmare has come true. Intertwined with backroom Washington political intrigue, Vengeance is a fast-paced, realistic thriller that entertains while raising serious questions about our national security, the power of religious faith to inspire good and evil, the consequences of revenge, and the validity of our constitutional safeguards. Former Speaker of the House Newt Gingrich and Washington Post reporter turned novelist Pete Earley are at their best in this third installment of their bestselling Brooke Grant series.