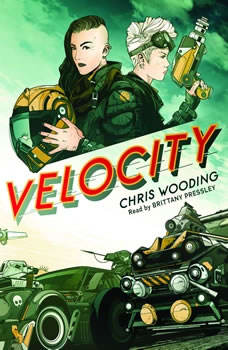 The Fast and the Furious meets The Hunger Games in acclaimed author Chris Wooding's blistering vision of the future. Buckle up for a fast-paced, high-octane thrill ride! Cassica and Shiara are best friends. They couldn't be more different, but their differences work to their advantage -- especially when they're drag racing. Cassica is fearless and determined, making her the perfect driver for daring, photo-finish victories. Shiara is intelligent and creative, able to build cars out of scrap and formulate daring strategies from the passenger's seat. Now they've set their sights on the Widowmaker -- the biggest, most anticipated, and most dangerous race of the year. The winners get a pass to a life of luxury and fame. The losers, more often than not, die in fiery explosions. And even if Cassica and Shiara survive the deadly three-day challenge... their friendship might be roadkill. This breathless reimagining of extreme sports is perfect for fans of Mad Max: Fury Road and NASCAR.