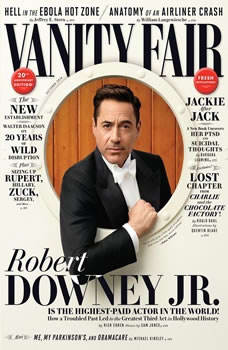 Vanity Fair is a cultural filter, sparking the global conversation about the people and ideas that matter most. With a dedication to journalistic excellence and powerful storytelling, Vanity Fair is the first choice-often the only choice-for the world's most influential and important audience. From print to social media, the big screen to the smartphone and now on audio, Vanity Fair is the arbiter of our era.This month's issue features:The 20th Anniversary of the New Establishment: Walter Isaacson on twenty years of wild disruptionRobert Downey Jr.: The greatest third act in Hollywood historyJackie after Jack: An adaptation from a new book chronicles the year that followed J.F.K.'s assassinationInvestigation: The deadly path of the worst Ebola epidemic in historySpecial Report: What Air France Flight 447 reveals about modern aviation safetyPlus: Michael Kinsley on Obamacare