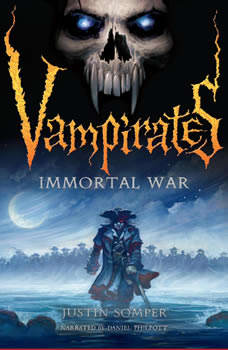 A bloody war is raging across the oceans, with the Pirate Federation and Nocturnals in alliance against the renegade Vampirates, led by Sidorio and Lola. Nothing will stop either one from making their presence dangerously known in battle. Connor and Grace Tempest each have important roles to play in the war - he as a pirate warrior at the heart of the fight; she as a powerful healer working with the war-wounded. As the twins face their greatest challenges to date, old allies and foes return to play their part in the ultimate battle of Pirate versus Vampirate. In this - the conclusion of this sequence of VAMPIRATES novels, the stakes are higher than ever. Relationships will change. An army of the dead will return to fight. There will be new threats and new alliances and characters will die before the ending which will see Grace and Connor poised to start momentous new journeys. In the words of Obsidian Darke, "So it ends, so it begins."