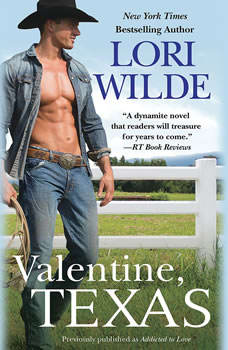 New York Times bestselling author Lori Wilde's heartwarming story of a bride who's lost her faith in love and the cowboy who makes her believe in second chances . . .**Formerly published as ADDICTED TO LOVE.ADDICTED TO LOVEGrowing up in Valentine, Texas, can make anyone believe in happily ever after. But recovering romantic Rachael Henderson has decided that love stinks. And after having two grooms ditch her at the altar, she commits an uncharacteristic act of rebellion that leaves her feeling liberated-until she's arrested by Sheriff Brody Carlton.Once upon a time, being hauled against the strong body of her first cowboy crush would have had Rachael planning the wedding of the year. Now it spurs her to create Romanceaholics Anonymous, and soon all of Valentine is divided as diehard romantics clash with anti-love cynics.With the town up in arms, the biggest cynic of them all-the sinfully sexy sheriff-can't stop fantasizing about this beautiful woman who's nothing but delicious trouble. Can he convince Rachael that it just may be possible to have her wedding cake and eat it too?