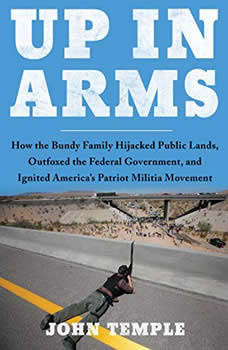 Up in Arms: How the Bundy Family Hijacked Public Lands, Outfoxed the Federal Government, and Ignited America's Patriot Militia Movement

“IT’S TIME! They have my cattle and now they have one of my boys. Range War begins tomorrow at Bundy Ranch.”These words, pounded out on a laptop at Cliven Bundy’s besieged Nevada ranch on April 6, 2014, ignited a new American revolution. Across the country, a certain type of citizen snapped to attention: This was the flashpoint the they’d been waiting for, a chance to help a fellow American stand up to a tyrannical and corrupt federal government.Up in Arms chronicles how an isolated clan of desert-dwelling Mormons became the guiding light—and then the outright leaders—of America’s Patriot movement. The nation was riveted in 2014, when hundreds of armed Bundy supporters forced federal agents to abandon a court-ordered cattle roundup in the largest gathering of government-loathing organizations the FBI had ever witnessed. Then, in 2016, Ammon Bundy, one of Cliven’s 13 children, led a 41-day armed takeover of the Malheur National Wildlife Refuge in Oregon.Those events and the subsequent shootings, arrests, and trials captured headlines, but they’re just part of a story that has never been fully told.John Temple, award-winning journalist and author of American Pain, gives readers an unprecedented and objective look at the real people and families at the heart of this highly publicized standoff. Eye-opening and instantly gripping, Up in Arms offers a propulsive and thoroughly researched narrative populated by rifle-toting cowboys, apocalyptic militiamen, undercover infiltrators, and the devout and charismatic Bundys themselves. In its main storyline, the book chronicles Ammon Bundy’s transformation from successful Phoenix businessman to the leader of an armed insurgency.In engrossing and plainspoken prose, Temple uses the Bundy family’s story to illuminate the rise of the Patriot militia movement in America. A seasoned investigative reporter, Temple embedded himself in a corner of the West where many citizens believe they’re treated like colonial subjects, not full-fledged Americans. Neither mainstream nor conservative media outlets have contextualized the religious, political, environmental, and economic factors, decades in the making, that set the stage for these events. Up In Arms presents the Bundys and their supporters as they truly are: neither violent criminals nor folk heroes, but a diverse collection of American rebels who believe government overreach justifies the taking up of arms.