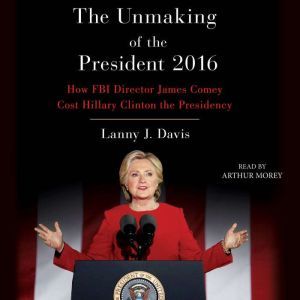 A longtime Washington insider argues that there was one determining factor that threw the election to Donald Trump: FBI Director James Comey’s October 28th letter to Congress, sent during the crucial eleven days before election day on November 8, 2016.During the week of October 24, 2016, Hillary Clinton was decisively ahead of Donald Trump in many polls and, more importantly, in the battleground states of Wisconsin, Michigan, and Pennsylvania. Then FBI Director James Comey sent his infamous letter to Congress on October 28, saying the bureau was investigating additional emails that may have been relevant to the Hillary Clinton email case. In The Unmaking of the President 2016, attorney Lanny J. Davis shows how Comey’s misguided announcement—just eleven days before the election—swung a significant number of voters toward Trump, winning him an Electoral College victory—and the presidency. Davis traces Clinton’s email controversy and Comey’s July 2016 appearance before Congress, in which he said the Clinton email matter was effectively closed. From that moment until Comey’s late October letter to Congress, Davis says, Clinton was destined to be elected president by substantial popular and electoral vote margins. But the decision to send his October 28 letter, so near to the election, not only violated long-standing justice department policies but also contained no new facts of improper emails at all—just pure speculation. Davis shows state by state, using polls data before October 28, and on election day, how voter support for Hillary Clinton eroded quickly. He proves that had the election been held on October 27, Hillary Clinton would have won the presidency by a substantial margin. Despite so many other issues in the closing days of the campaign—Trump’s behavior, the Russian hacking, reports of Clinton momentum in marginal states such as Georgia, Arizona, even Texas—after the October 28 Comey letter, everything changed. References to “Clinton emails” and “new criminal investigation” dominated media coverage virtually round-the-clock through election day November 8. Now Davis proves with raw, indisputable data how Comey’s October surprise changed American history in the blink of an eye and cost Hillary Clinton the presidency.