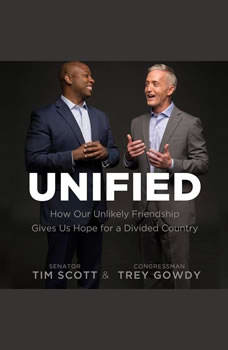 Unified: How Our Unlikely Friendship Gives Us Hope For a Divided Country

In a divided country desperate for unity, two sons of South Carolina show how different races, life experiences, and pathways can lead to a deep friendship?even in a state that was rocked to its core by the 2015 Charleston church shooting. Tim Scott, an African-American US senator, and Trey Gowdy, a white US congressman, won&rsquo;t allow racial lines to divide them. They work together, eat meals together, campaign together, and make decisions together. Yet in the fall of 2010?as two brand-new members of the US House of Representatives?they did not even know each other. Their story as politicians and friends began the moment they met and is a model for others seeking true reconciliation. In Indivisible, Senator Scott and Congressman Gowdy, through honesty and vulnerability, inspire others to evaluate their own stories, clean the slate, and extend a hand of friendship that can change your churches, communities, and the world.

In this reasoned exploration of justice, retribution, and redemption, the champion of the new monastic movement, popular speaker, and author of the bestselling The Irresistible Revolution offers a powerful and persuasive appeal for the abolition of...