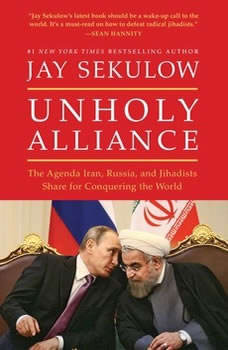 Unholy Alliance: The Agenda Iran, Russia, and Jihadists Share for Conquering the World

The New York Times bestselling author of Rise of ISIS exposes the dangers of radical Islam and the effects it has on the American way of life in this informative and eye-opening new book.The fundamental principle of our system of government is individual liberty. Our forefathers chose to bequeath a system that limited the reach of government officials so that Americans could control their own lives. When the United States was attacked on September 11, 2001, the true face of radical Islam was exposed for the world to see. Our nation came face-to-face with a rabid ideology that was—and is—committed to destroying our freedoms and imposing Islamic Shariah onto the Western world. The principles of Shariah, which demands total submission to Allah, completely clash with US law and legal tradition. But that doesn’t stop adherents of fundamental Islam from executing those who they believe have offended Islam and Muhammad. As such, Shariah has become a threatening danger to our country, our values, and our way of life. In Unholy Alliance, Jay Sekulow and the American Center for Law and Justice (ACLJ) tackle radical Islam head on. They expose the attempts by fundamentalist Muslims—both in the US and abroad—to destroy our legal system in favor of a system that would destroy our essential liberties. They bring attention to terrorism in today’s world and reflect on the recent Paris and San Bernardino attacks, as well as Russia, Syria, Iran, and continuous threats to our nation. Each of us should be aware of what is going on in the world and learn what we can do as individuals to protect and defend the Constitution against all enemies, be they foreign or domestic.