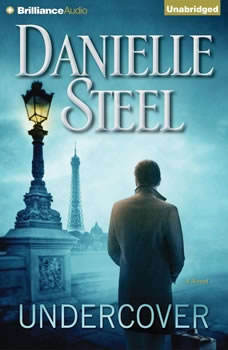 A powerful novel from #1 New York Times bestselling author Danielle Steel, about an ambassador’s daughter who is kidnapped and the former undercover agent who comes to her aid, saving her life in more ways than one.For DEA Special Agent Marshall Everett, life as he knows it is over once a gunshot wound renders his arm useless. Barred forever from the undercover work he loves, he has nothing—no close friends, no family, no hometown or base, and no desire to settle for life behind a desk. He’s called to action in the most unlikely of places when he stumbles upon a beautiful girl burying an old steel box in a Parisian park. Drawn into the mystery, Marshall soon discovers that she is Ariana Gregory, daughter of the U.S. ambassador to Argentina, who is trying to find herself again after being kidnapped and brainwashed by radical revolutionaries. But there are powerful forces at large who will not rest until they secure revenge, and Marshall and Ariana will face yet more trials—and another beginning—before they can truly bury the dark past and embark on a new life together.

Take a splash of betrayal, add a few drops of outrage, give a good shake to proper behavior and take a big sip of a cocktail called…Ladies' Night!Grace Stanton's life as a rising media star and beloved lifestyle blogger takes a surprising tur...

In this rich, involving novel from #1 New York Times bestselling author Danielle Steel, a woman's life catapults from the old to the new, as she learns to seize the moment.Stephanie Adams is a devoted stay-at-home mother, married to a successful law...

The Island
by Elin Hilderbrand

A summertime story only Elin Hilderbrand can tell: a family in upheaval after a cancelled wedding fill an island summer with heartache, laughter, and surprises. Birdie Cousins has thrown herself into the details of her daughter Chess's lavish...

The Sins of the Mother
by Danielle Steel

Every woman makes choices. And no one has made more difficult choices than Olivia Grayson. The enormously successful businesswoman missed out on much of her children’s lives while she built her legendary home-furnishings empire. In Danielle St...

In this timely and intriguing novel, a TV journalist and ex-Navy SEAL delve deep under the surface of political influence and power to uncover the corruption that lies beneath. Risk-taking investigative television journalist Alix Phillips dashes fro...

Twin boys grow up in the same family, in the same town. Dramatically different, they become bitter enemies, even as children: one good, one bad. One leaves his peaceful hometown, but when all else fails, the prodigal son returns, twenty years later....

Five children meet on the first day of kindergarten. In the years that follow, they become friends and more than friends. Together, they will find strength, meet challenges, face life’s adventures, endure loss, face stark realities, and open t...