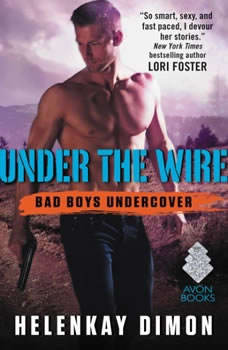 Under the Wire: Bad Boys Undercover

The Bad Boys of the Alliance—a top-secret military security agency—are back for more in HelenKay Dimon’s sexy, action-packed seriesOnly one thing could pull Reid Armstrong away from a vacation he’s earned with every muscle in his finely honed body—learning that his former fiancée has disappeared on a top-secret science expedition in the middle of nowhere. Second chances don’t come often in Reid’s business, and he needs to prove his worth to Cara Layne or die trying.Waking up to find her camp destroyed and her colleagues missing, Cara is a walking target. She can’t trust anyone, least of all Reid. Even if his skills get them out alive, he’s a heartache waiting to strike twice. Yet being in close proximity proves their connection burns hotter than ever.The body count is rising, the enemy is getting closer, and soon Reid will be right back in the position that cost him everything—forced to choose between the woman he loves, and the job that’s his only hope of saving them both . . .