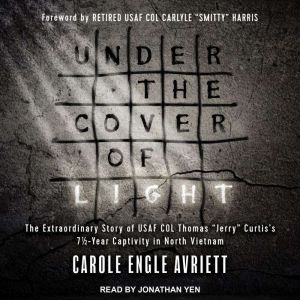 Under the Cover of Light: The Extraordinary Story of USAF COL Thomas "Jerry" Curtis's 7 1/2 -Year Captivity in North Vietnam

In 1965, Col. Thomas "Jerry" Curtis's helicopter was shot down over North Vietnam. He was immediately captured and spent 7 and a half years confined in a filthy 5' x 7' cell at the notorious Hanoi prison camp. Thousands of miles from home and unable to communicate with his wife and children, Jerry endured months of solitary confinement, suffocating heat, freezing cold, grueling physical and psychological torture, constant hunger, and unimaginable mental duress. And yet, time and again, the Light that darkness cannot overcome became his beacon of hope. Now, for the first time, Jerry shares the full story of his 2,703 days in captivity and what he learned about faith, hope, and the indomitable power of the human spirit.