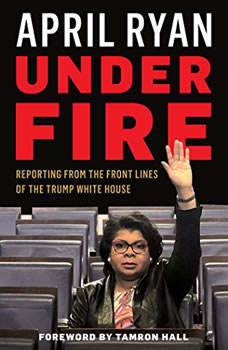 Under Fire: Reporting from the Front Lines of the Trump White House

Veteran White House reporter April Ryan thought she had seen everything in her two decades as a White House correspondent. And then came the Trump administration. In Under Fire, Ryan takes us inside the confusion and chaos of the Trump White House to understand how she and other reporters adjusted to the new normal. She takes us inside the policy debates, the revolving door of personnel appointments, and what it is like when she, as a reporter asking difficult questions, finds herself in the spotlight, becoming part of the story. With the world on edge and a country grappling with a new controversy almost daily, Ryan gives readers a glimpse into current events from her perspective, not only from inside the briefing room but also as a target of those who want to avoid answering probing questions. After reading her new book, readers will have an unprecedented inside view of the Trump White House and what it is like to be a reporter Under Fire.

Guests of the Ayatollah
by Mark Bowden

On November 4, 1979, a group of radical Islamist students, inspired by revolutionary Iranian leader Ayatollah Khomeini, stormed the U.S. embassy in Tehran. They took fifty-two Americans hostage and kept nearly all of them captive 444 days. The Ira...

Chris Hedges on the most taboo topics in America, with David Talbot. Chris Hedges has been telling truth to (and against) power since his earliest days as a radical journalist. He is an intellectual bomb thrower, who continues to confront American ...

From the National Book Award–winning author of Stamped from the Beginning comes a bracingly original approach to understanding and uprooting racism and inequality in our society—and in ourselves. “The only way to undo racism is to ...

n original and consequential argument about race, crime, and the law Today, Americans are debating our criminal justice system with new urgency. Mass incarceration and aggressive police tactics-and their impact on people of color-are feeding outrage...

April 16th. The year is 1963. Birmingham, Alabama has had a spring of non-violent protests known as the Birmingham Campaign, seeking to draw attention to the segregation against blacks by the city government and downtown retailers. The organizers lo...

For the first time ever, twenty-four original recordings of Dr. Martin Luther King, Jr., from his iconic "I Have A Dream" speech to his stirring sermon "A Knock At Midnight," are collected together in this treasured box set. His landmark speeches t...

His speeches stirred a generation to change - and outlined a practical way to economic freedom and true democracy. His words would help bring about the end of a brutally unequal system - and would show a timeless method for achieving fairness and j...

Why is it that so many efforts by liberals to lift the black underclass not only fail, but often harm the intended beneficiaries?In Please Stop Helping Us, Jason L. Riley examines how well-intentioned welfare programs are in fact holding black Ameri...