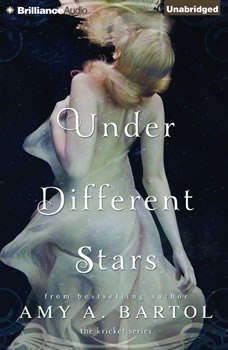 Winner of four 2014 UtopYA Awards, including Best Book of the Year and Best Sci-Fi Book of the YearKricket Hollowell never wished upon stars. She was too busy hiding in plain sight, eluding Chicago’s foster care system. As her eighteenth birthday approaches, she now eagerly anticipates the day she’ll stop running and finally find her place in the world.That day comes when she meets a young Etharian soldier named Trey Allairis, who has been charged with coming to Earth to find Kricket and transport her to her true home. As danger draws close, he must protect her until she can wield the powers she cannot use on Earth…and he soon realizes that counting a galaxy of stars would be easier than losing this extraordinary girl.Kyon Ensin knows the powerful depths of Kricket’s gifts—gifts he’ll control when he takes her for his tribe and leads the forces that will claim Ethar and destroy his enemies, starting with Trey Allairis. Now, Kricket faces the most difficult choice of her life: whether to wage a battle for survival, or a fight for love.

Under Different Stars
The Kricket Series #1

Sea of Stars
The Kricket Series #2

Darken the Stars
The Kricket Series #3