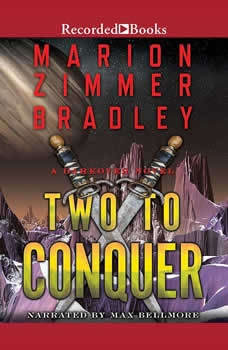 What forces would operate if there were two objects that were absolutely identical in form and substance? This problem has occupied both workers in magic and the scientists of physics and psychology. It is the pivot of Marion Zimmer Bradley's novel of Darkover during the final flaming days of the Ages of Chaos. This is the story of the era when the planet of the Bloody Sun was divided into a hundred warring kingdoms and civilization teetered on the edge of oblivion. It is the story of Bard di Asturien, ambitious soldier-outlaw, and of his opponent, Varzil the Good, who struggled to establish the Compact. And it is also the story of a man from distant Terra named Paul Harrell who was the exact duplicate of Varzil's enemy. Two to Conquer is a novel of social forces in combat, of the use and misuse of science, of war, of rape, and of witchcraft.