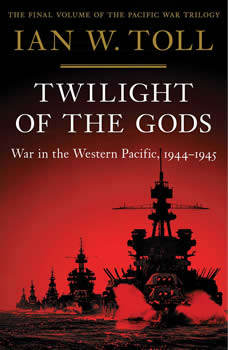 The final volume of the magisterial Pacific War Trilogy from acclaimed historian Ian W. Toll, one of the great storytellers of war (Evan Thomas). Twilight of the Gods is a riveting account of the harrowing last year of World War II in the Pacific, when the U.S. Navy won the largest naval battle in history; Douglas MacArthur made good his pledge to return to the Philippines; waves of kamikazes attacked the Allied fleets; the Japanese fought to the last man on one island after another; B-29 bombers burned down Japanese cities; and Hiroshima and Nagasaki were vaporized in atomic blasts. Ian W. Tolls narratives of combat in the air, at sea, and on the beaches are as gripping as ever, but he also takes the reader into the halls of power in Washington and Tokyo, where the great questions of strategy and diplomacy were decided. Lionel Barber of the Financial Times chose the second volume of the series (The Conquering Tide) as the preemiment book of 2016, calling it military history at its best. Readers who have been waiting for the conclusion of Tolls masterpiece will be thrilled by this final volume.