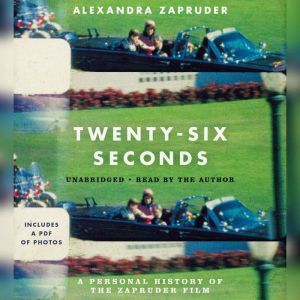 Twenty-Six Seconds: A Personal History of the Zapruder Film

The moving, untold family story behind Abraham Zapruder's film footage of the Kennedy assassination and its lasting impact on our world. Abraham Zapruder didn't know when he ran home to grab his video camera on November 22, 1963 that this single spontaneous decision would change his family's life for generations to come. Originally intended as a home movie of President Kennedy's motorcade, Zapruder's film of the JFK assassination is now shown in every American history class, included in Jeopardy and Trivial Pursuit questions, and referenced in novels and films. It is the most famous example of citizen journalism, a precursor to the iconic images of our time, such as the Challenger explosion, the Rodney King beating, and the 9/11 attack on the Twin Towers. But few know the complicated legacy of the film itself. Now Abraham's granddaughter, Alexandra Zapruder, is ready to tell the complete story for the first time. With the help of the Zapruder family's exclusive records, memories, and documents, Zapruder tracks the film's torturous journey through history, all while American society undergoes its own transformation, and a new media-driven consumer culture challenges traditional ideas of privacy, ownership, journalism, and knowledge. Part biography, part family history, and part historical narrative, Zapruder demonstrates how one man's unwitting moment in the spotlight shifted the way politics, culture, and media intersect, bringing about the larger social questions that define our age.