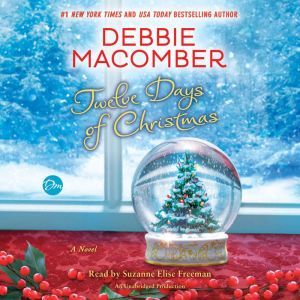 NEW YORK TIMES BESTSELLER • Continuing in a festive annual tradition, Debbie Macomber returns with a new original holiday novel full of romance and cheer—and the magical prospect of finding love in the most unexpected places.

Friendly and bubbly, Julia Padden likes nearly everyone, but her standoffish neighbor, Cain Maddox, presents a particular challenge. No matter how hard she’s tried to be nice, Cain rudely rebuffs her at every turn, preferring to keep to himself. But when Julia catches Cain stealing her newspaper from the lobby of their apartment building, that’s the last straw. She’s going to break through Cain’s Scrooge-like exterior the only way she knows how: by killing him with kindness.

To track her progress, Julia starts a blog called The Twelve Days of Christmas. Her first attempts to humanize Cain are far from successful. Julia brings him homemade Christmas treats and the disagreeable grinch won’t even accept them. Meanwhile, Julie’s blog becomes an online sensation, as an astonishing number of people start following her adventures. Julia continues to find ways to express kindness and, little by little, chips away at Cain’s gruff façade to reveal the caring man underneath. Unbelievably, Julia feels herself falling for Cain—and she suspects that he may be falling for her as well. But as the popularity of her blog continues to grow, Julia must decide if telling Cain the truth about having chronicled their relationship to the rest of the world is worth risking their chance at love.

Praise for Twelve Days of Christmas

“Another heartwarming seasonal [Debbie] Macomber tale, which fans will find as bright and cozy as a blazing fire on Christmas Eve.”—Kirkus Reviews

“Twelve Days of Christmas is a delightful, charming read for anyone looking for an enjoyable Christmas novel. . . . Settle in with a warm blanket and a cup of hot chocolate, and curl up for some Christmas fun with Debbie Macomber’s latest festive read.”—Bookreporter

“If you’re looking for a quick but meaningful holiday romance that will be sure to spark a need inside you to show others kindness, look no further than Twelve Day of Christmas.”—Harlequin Junkie

“Twelve Days of Christmas is a charming, heartwarming holiday tale. With poignant characters and an enchanting plot, Macomber again burrows into the fragility of human emotions to arrive at a delightful conclusion.”—New York Journal of Books