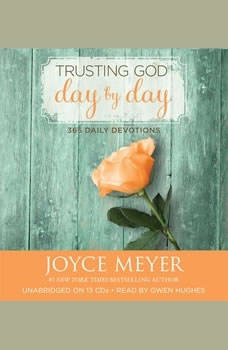 In her dynamic new devotional, TRUSTING GOD DAY BY DAY, international speaker and New York Times bestselling author Joyce Meyer provides you with powerful "starting points" for every day of the year. Each day's devotion is filled with practical advice and help from Joyce along with life-changing promises from God's Word that you can quickly and easily apply in your own life.The world wants you to place your trust in your circumstances, your success, your talents and the opinions of others. But God's called you to rise above the world, and put your full trust in Him - to believe and apply what He's promised in His Word more than anything else.Living this way won't just happen - you have to be intentional. But where do you begin? We all need help to make good choices, battle worry, overcome anxiety and keep a positive attitude. Using this devotional, readers will learn to grab hold of life this way, day by day, with trust in God.