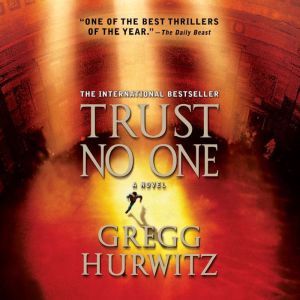 Trust No One: with bonus audio short story, "The Awakening," a prelude

Includes a bonus audio short story, “The Awakening,” a prelude.Over the past two decades, Nick Horrigan has built a quiet, safe life for himself, living as much under the radar as possible. But all of that shatters when, in the middle of the night, a SWAT team bursts into his apartment, grabs him and drags him to a waiting helicopter. A terrorist— someone Nick has never heard of—has seized control of a nuclear reactor, threatening to blow it up. And the only person he’ll talk to is Nick, promising to tell Nick the truth behind the events that shattered his life twenty years ago. At seventeen years old, Nick Horrigan made a deadly mistake—one that cost his stepfather his life, endangered his mother, and sent him into hiding for years. Now, what Nick discovers in that nuclear plant leaves him with only two choices—to start running again, or to fight and finally uncover the secrets that have held him hostage all these years. As Nick peels back layer after layer of lies and deception, buffeted between the buried horrors of the past and the deadly intrigues of the present, he finds his own life—and the lives of nearly everyone he loves—at risk. And the only thing guiding him through this deadly labyrinth are his stepfather’s dying words: TRUST NO ONE.Acclaimed for years by both critics and his peers as one of the finest thriller writers today, Gregg Hurwitz has lived up to all the accolades and expectations with Trust No One, an electrifying and compelling novel that will be remembered for years to come.