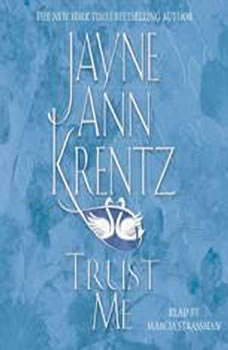 The captivating new novel from the New York Times best selling author of Grand Passion!Passion is simple, but there's no logic to love....When Desdemona Wainwright tries to collect a much-needed payment for catering Sam Stark's canceled wedding reception, she encounters not a heartbroken suitor, but the steel-willed head of a multimillion-dollar consulting firm with the cold brain of a computer -- and the finely hewn body of a medieval knight. Sam sees a beautiful, theatrical hoyden with huge turquoise eyes who has just the right professional catering skills he needs for his business. Opposites attract, and before long, he's sure he's found the perfect business wife; but Desdemona intends to break down the walls around his heart.When someone tries to steal his top-secret computer program, Sam's suspicions center on the people Desdemona holds most dear. As sinister intrigues swirl around them all, this unlikely pair discover that their love and even their lives may depend on emotions and bonds that can't be measured -- like unstoppable passion and unbreakable trust. Filled with fabulous fun, tingling suspense, and a wonderful new love story, Trust Me is great entertainment.

Flirting with Pete
by Barbara Delinsky

Casey Ellis has arrived at a lonely place in her life. Her mother remains in a comatose state several years after a terrible accident -- and now her father has died. Although Casey never met him, she held an oblique hope that someday her father mig...

In Janet Evanovich and Charlotte Hughes's Full Tilt, he lives life in the fast lane and she's along for the ride-with no brakes....Beaumont, South Carolina, has mint julips, ladies who lunch, good ole boy politics, and Jamie Swift. She's running her...

With over 25 million books in print, best-selling author Amanda Quick is a favorite of readers who relish historical romances. In her works, including Mistress, Mischief, and Affair, Amanda Quick offers delicious romantic thrillers set in the opulen...

Cover of Night
by Linda Howard

In the charming rural town of Trail Stop, Idaho, accessible to the outside world by only a single road, young widow Cate Nightingale lives peacefully with her four-year-old twin boys, running a bed-and-breakfast. Though the overnight guests are few ...

Everyone thought Jessie Benedict's impending marriage to Sam Hatchard was a great arrangement—everyone, that is, but Jessie herself. Was she the only one who could see that Hatchard, her powerful father's protege, had a scheming ulterior motiv...