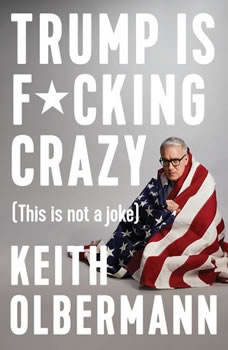 Trump is F*cking Crazy: (This is Not a Joke)

Since Donald Trump's presidential nomination, Keith Olbermann has emerged as one of the web's most popular anti-Trump screedists—each installment of his GQ web series The Resistance receives nearly four million views, and his fiercely progressive monologues have garnered a new generation of fans and followers. In TRUMP IS F*CKING CRAZY, Olbermann takes our Commander in Chief and his politics apart with journalistic acuity and his classic in-your-face humor. With more than 50 individual essays adapted from his GQ commentaries, including new up-to-the-minute material, TRUMP IS F*CKING CRAZY is essential reading for concerned citizens who—like Olbermann—refuse to normalize or accept our new political reality.

This has been adapted to include content exclusive to the audio, including the following commentaries:

*Guess What Else Happened on 6/9/16?
*A Timeline of Treason
*Trump and Charlottesville: Too Little Too Late
*Make America White Again
*Impeachment by Facebook