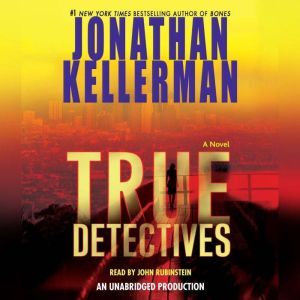 In Jonathan Kellerman’s gripping novels, the city of Los Angeles is as much a living, breathing character as the heroes and villains who roam its labyrinthine streets. Sunny on the surface but shadowy beneath, this world of privilege and pleasure has a dark core and a dangerous edge. In True Detectives, Kellerman skillfully brings his renowned gifts for breathless suspense and sharp psychological insight to a tale that resonates on every level and satisfies at every turn.

Bound by blood but divided by troubles as old as Cain and Abel, Moses Reed and Aaron Fox were first introduced in Kellerman’s bestselling Bones. They are sons of the same strong-willed mother, and their respective fathers were cops, partners, and friends. Their turbulent family history has set them at odds, despite their shared calling. Moses—part Boy Scout, part bulldog, man of few words—is a no-frills LAPD detective. Aaron, sharp dresser and smooth operator, is an ex-cop turned high-end private eye. Usually they go their separate ways. But the disappearance of Caitlin Frostig isn’t usual. For Moses, it’s an ice-cold mystery he just can’t outrun, even with the help of psychologist Alex Delaware and detective Milo Sturgis. For Aaron, it’s a billable-hours bonanza from his most lucrative client. Like it or not, Moses and Aaron are in this one together–and the rivalry that rules them won’t let either man quit till the case is cracked.

A straight-arrow, straight-A student from Malibu, Caitlin has only two men in her life: her sullen single father and her wholesome college sweetheart, who even the battling brothers agree seems too downright upright to be true. Reluctantly tag-teaming in a desperate search for fresh leads, Moses and Aaron zero in on Caitlin’s white knight as their primary “person of interest,” hoping that, like most people in L.A., he has a secret side.

But they uncover more than just a secret as they descend into the sinister, seamy side of the City of Angels after dark, populated by a Hollywood Babylon cast of the glamorous and the damned: a millionaire movie director turned hatemongering eccentric; a desperate Beverly Hills housewife looking for an exit from the fast lane; a heartthrob actor being eaten alive by personal demons; a hooker who’s probably seen it all . . . and might just know too much. And at the center, a dead young woman whose downward spiral and brutal end loom over Moses and Aaron like an omen of what may come to be if the dark end of the street claims another lost soul.