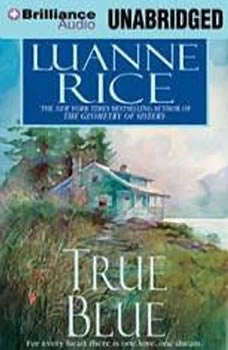 THE STORY OF TWO SISTERS AND THE BOY NEXT DOOR…. The acclaimed author of Firefly Beach and other New York Times bestsellers, Luanne Rice, explores the powerful bonds that connect old friends, and the joy of life’s unexpected second chances. Now, returning once more to the Connecticut beach town at the center of many of her most beloved novels, she touches our hearts with a spellbinding story of a love lost — and saved — by the power of what was always meant to be.… TRUE BLUE Veterinarian Rumer Larkin never felt the need to stray from Hubbard’s Point. Rich with legends of seafaring spirits and lost treasures, the rustic village still echoes with the memories of Rumer’s past — even after those she loved have left. But now, so many summers after Zeb Mayhew broke her heart, he has returned with his teenage son, and Rumer knows her quiet life will never be the same again. Zeb has come back hoping to reconnect with his son, with the past and all its mistakes. Suddenly facing Rumer again, Zeb discovers where he belongs. He could never forget the girl who used to climb onto his roof with him to watch the stars. But neither Zeb nor Rumer knows if it’s too late to do more than regret the path not taken — or if every path leads us back to the one true love of our life….

There was a time when the world was sweeter....when the women in Beaufort, North Carolina, wore dresses, and the men donned hats.... Every April, when the wind smells of both the sea and lilacs, Landon Carter remembers 1958, his last year at Beaufo...