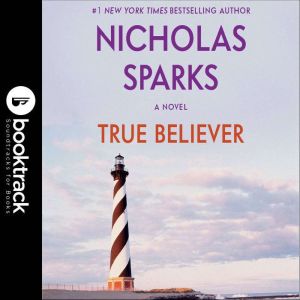 True Believer: Booktrack Edition adds an immersive musical soundtrack to your audiobook listening experience! *~b~> Part love story, part ghost story, True Believer is an unforgettable romance about believing in the impossible, trusting in fate, and unraveling the mysteries of the human heart.As a science journalist with a regular column in Scientific American, Jeremy Marsh specializes in debunking the supernatural-until he falls in love with the granddaughter of the town psychic.When Jeremy receives a letter from Boone Creek, North Carolina, about ghostly lights appearing in a cemetery, he can't resist driving down to investigate. Here, in this tightly knit community, Lexie Darnell runs the town's library. Disappointed by past relationships, she is sure of one thing: her future is in Boone Creek, close to all the people she loves. From the moment Jeremy sets eyes on Lexie, he is intrigued. And Lexie, while hesitating to trust this outsider, finds herself thinking of him more than she cares to admit. Now, if they are to be together, Jeremy must do something he's never done before-take a giant leap of faith.*Booktrack is an immersive format that pairs traditional audiobook narration to complementary music. The tempo and rhythm of the score are in perfect harmony with the action and characters throughout the audiobook. Gently playing in the background, the music never overpowers or distracts from the narration, so listeners can enjoy every minute. When you purchase this Booktrack edition, you receive the exact narration as the traditional audiobook available, with the addition of music throughout.