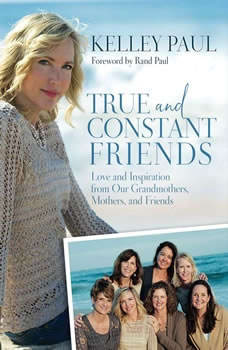 True and Constant Friends: Love and Inspiration from Our Grandmothers, Mothers, and Friends

Kelley Paul, wife of Senator Rand Paul, celebrates lifelong friendships in a beautifully illustrated book about the female bond. When Kelley Paul arrived on the Rhodes College campus in 1981, she immediately bonded with six women. Three decades of intimate friendship later, Kelley celebrates these relationships and the women who inspired them all. She tells their stories and those of their grandmothers, mothers and sisters, providing a microcosm of women raising families and building lives in 20th- and 21st-century America. The extraordinary lives of Kelley's and her friends' role models-from the Southern matriarch to the poor Irish immigrant-are honored in this lovely book which offers oral history along with classic poetry, art, and photography. Throughout, Kelley explores the universal themes of hardship, determination, commitment, family, independence, optimism, friendship and love-and illuminates the power of the female bond that enriches all our lives.