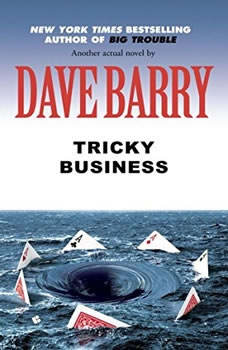 The Extravaganza of the Seas is a five-thousand-ton cash cow, a top-heavy tub whose sole function is to carry gamblers three miles from the Florida coast, take their money, then bring them back so they can find more money. In the middle of a tropical storm one night, these characters are among the passengers it carries: Fay Benton, a single mom and cocktail waitress desperate for something to go right for once; Johnny and the Contusions, a ship's band with so little talent they are ... well, the ship's band; Arnold and Phil, two refugees from the Beaux Arts Senior Center; Lou Tarant, a wide, bald man who has killed nine people, though none recently; and an assortment of uglies whose job it is to facilitate the ship's true business, which is money laundering or drug-smuggling or...something. What happens to them all in the midst of the fiercest storm in years, the unpredictable ways in which this trip will change their lives and send them ricocheting off each other like a giant game of pinball, is the story of this astonishing, wickedly satisfying, all-too-human novel by "one of the funniest writers alive" (Carl Hiaasen).