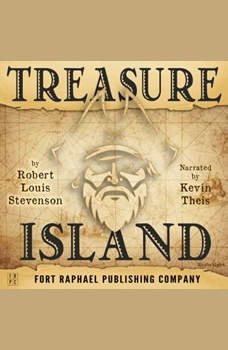 This is a SoundCraft Audiobooks production -enhanced with music and sound effects -of "Treasure Island" -the first (and most successful) of Robert Louis Stevenson's many works of long-form fiction and forever stamped into the public consciousness the names of Jim Hawkins, Squire Trelawney and, of course, the infamous buccaneer Long John Silver.

An unmatched tale of adventure, greed and heart-pounding suspense, "Treasure Island" follows young Jim as he encounters one piratical character after another, eventually embarking on a search for buried treasure that will take him halfway round the world as he and his companions hunt for the elusive pile of gold secreted away by the infamous and cruel pirate, Captain Flint.

Long hailed as one of the greatest adventure stories ever created, Robert Louis Stevenson's "Treasure Island" has been adapted into countless stage and screen adaptations and is here presented -along with a biography of the author -in it's original, unabridged form.