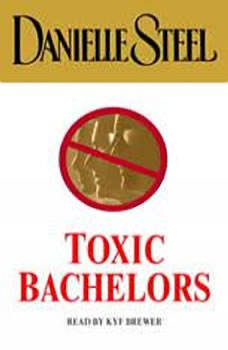 Danielle Steel explores the perils of dating, relationships, and love in a novel that takes us into the intoxicating, infuriating world of three charming single men, also known as…

They were the best of friends and the most daunting of bachelors....Charlie Harrington, a handsome philanthropist, has such high expectations for his perfect bride that no mortal need apply....Adam Weiss, a forty-something celebrity lawyer, prefers his women very young, very voluptuous, and very short-term….And for Gray Hawk, a gifted artist with a knack for attracting troubled relationships, women are fine; it’s just the idea of family he can’t imagine (particularly the family of the woman he’s dating).

Now the three friends, spending their annual summer vacation cruising the Mediterranean aboard Charlie’s majestic yacht, are about to have their bachelorhood rocked. By autumn all three will fall precipitously into relationships they never saw coming. Charlie begins dating a crusading social worker who couldn’t be further from his ideal–until he makes a stunning discovery about her. Adam gets involved with his usual twenty-something bombshell–only this one has a remarkable mind of her own. And Gray, who has avoided both business and family like the plague, has managed to fall head over heels for a successful career woman– who just happens to be a mother as well.

As another holiday on the yacht approaches, and with it a turning point in each man’s life, the three bachelors are forced to face the things that scare them most: their phobias about relationships, the wounds of the past–and the kind of women who challenge their deepest terrors. What happens next will spark big changes for Charlie, Adam, and Gray–and might just put an end to their carousing days forever. For as the once-carefree trio is about to discover, love is the most unpredictable adventure of all.

Filled with all the joy, complexity, and unexpected surprises of life, Toxic Bachelors is Danielle Steel at her poignant and penetrating best.

Every so often, I switch to Danielle Steele to take a break from the thrillers/mysteries that I prefer. I'd say that this story started out a little dullsville. It got a little more interesting towards the middle and then just fit together all nice and neat-- which I think Ms. Steele is known for. Good Chick Book, but nothing earth shattering.

This book had to be one of THE biggest wastes of time ever. The writing was predictable, repetitive, and forgetable. Terrible book.

It dragged on for so long...Get on with it already!