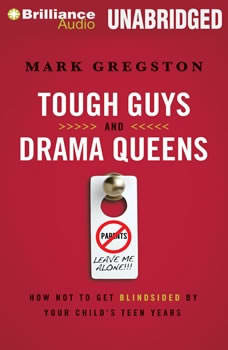 Tough Guys and Drama Queens: How Not to Get Blindsided by Your Child's Teen Years

If you’ve ever lain awake at night wondering what might be around the corner of your child’s adolescence, this audiobook is for you! After more than thirty-eight years of working with more than 2,500 teens, Mark Gregston, founder of Heartlight, a Christian residential counseling center, introduces Tough Guys and Drama Queens—a must-listen “how-to” audiobook for parents of pre-teens and teens with time-tested, biblical techniques to guide you through these unavoidably challenging years.Mark helps parents realize that some natural parenting approaches are actually counter-productive and therefore totally ineffective. In place of those he offers tried-and-true wisdom on the vital importance of relationship, forgiveness, and explains how conflict is actually the precursor to change.Every day your child is bombarded by a highly sexualized culture and over-exposed to words and images that can influence them beyond your reach. Your connection to them during these years is critical as is your response to tough issues such as:• appearance• performance• authority & respect• boundariesComplete with bonus insights, questions to engage your child, and instruction for teachers, counselors, pastors, and other family members, Tough Guys and Drama Queens offers proactive tools to prepare you for the incredible teen years ahead.