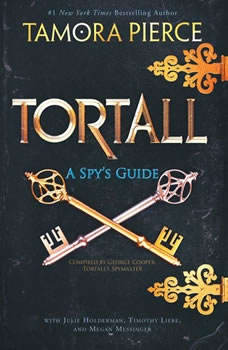 The must-have guide for any fan of #1 New York Times bestselling fantasy author TAMORA PIERCE! Enter the world of Tortall in this audiobook guide, brought to you by the author who Sarah J. Maas says “shaped [her] not only as a young writer but also as a young woman” and whom Leigh Bardugo calls “the real lioness.”

The secrets of Tortall are revealed. . . .

As Tortall’s spymaster, George Cooper has sensitive documents from all corners of the realm. When Alanna sends him a surprising letter, he cleans out his office and discovers letters from when King Jonathan and Queen Thayet first ascended the throne, notes on creating the Shadow Service of spies, threat-level profiles on favorite characters, Daine’s notes on immortals, as well as family papers, such as Aly’s first report as a young spy and Neal’s lessons with the Lioness. This rich guide also includes the first official timeline of Tortallan events from when it became a sovereign nation to the year Aly gives birth to triplets. Part history, part spy training manual, and entirely fascinating, this beautiful guide makes a perfect gift and is ideal for anyone who loves Alanna, King Jonathan, Queen Thayet, Kel, Neal, Aly, Thom, Daine, Numair, and the unforgettable world of Tortall!