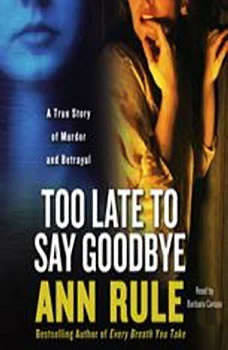 Too Late to Say Goodbye

Jenn Corbin appeared to have it all: two little boys, a posh home in the suburbs of Atlanta, and a husband—Dr. Bart Corbin, a successful dentist— who was handsome and brilliant. Then, in December 2004, Jenn was found dead with a bullet in her head, apparently by suicide. Only later would detectives learn that another woman in Dr. Corbin’s past had been found years earlier with nearly the exact same wound to the head, also ruled a suicide.  In Too Late to Say Goodbye, Ann Rule—working in cooperation with victims’ families, police investigators, and sources from Georgia to Australia—unravels the now-sensational Corbin murders. What emerges is an incredible tale of jealous rage; of stunning evidence that runs from the steamy to the macabre; and of a fateful, mind-boggling coincidence that drove Dr. Corbin to kill again. The definitive unraveling of one of the strangest murder investigations of our time, this is a chilling portrait of two beautiful, successful women and the villain who made their murders look like suicides.

The Bluegrass Conspiracy
by Sally Denton