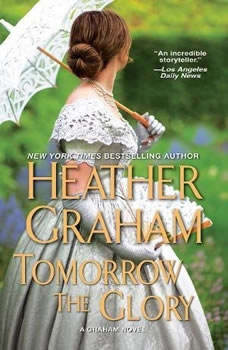 Previously published under the pen name Shannon Drake, so this is the first time it will be available under the Heather Graham name.THE WOMANShe is Kendall Moore—a spirited southern belle as proud as she is beautiful, driven by a cruel marriage-bed betrayal to risk her life in a dangerous gamble for freedom….THE MANHe is Brent McClain—the Confederate agent who meets Kendall aboard the warship Jenni-Lyn, and loses his heart in a single, searing night of passion….THE GLORYBut war and treachery soon tear them apart—Brent into raging battle, Kendall into desperate flight from a scorned husband’s white-hot vengeance. They live only for the promise of tomorrow—and a love that will burn forever in both their hearts.“A master storyteller.” —RT Book Reviews