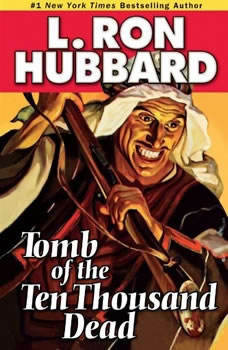 Tomb of the Thousand Dead

Before Indiana Jones and the Lost Ark were even a gleam in Spielberg?s eye, one intrepid pilot flew out of the sky in search of treasure . . . only to find a bit of hell on earth. Captain Gordon lives like he flies?by the seat of his pants, taking on any job and all comers. Now he?s bound for the forbidding mountains along the shores of the Arabian Sea, transporting a team of anthropologists on the trail of Alexander the Great. But ancient history is about to come to dangerous life with the discovery of a long-buried map?a map leading to high adventure, untold treasure, and cold-blooded murder. . . . Gordon?s headed deep into The Tomb of the Ten Thousand Dead?unearthing a secret that could bury him. Join the thrilling treasure hunt as the award-winning audio drama of The Tomb of the Ten Thousand Dead gives voice to one of history?s greatest mysteries. Not only was Hubbard steeped in the history of the ancient world, he was also an avid adventurer?both in his own right and as a respected member of the famed Explorers Club. As such, he brought a wealth of insight, experience and authenticity to all his tales of adventure. Also includes two additional adventures: The Price of a Hat, in which the key to the Russian Czar?s life is hidden in a most unexpected place, and Starch and Stripes, the story of a U.S. Marine who sets a trap for a tropical warlord that reverberates all the way back to Washington. Cast: RF Daley, Ralph Lister, Enn Reitel, Jim Meskimen, Joey Naber, Noelle North, Fred Tatsciore and Michael Yurchak.

Tomb of the Thousand Dead
Stories from the Golden Age