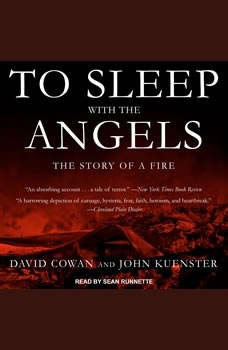 To Sleep with the Angels: The Story of a Fire

If burying a child has a special poignancy, the tragedy at a Catholic elementary school in Chicago almost fifty years ago was an extraordinary moment of grief. One of the deadliest fires in American history, it took the lives of ninety-two children and three nuns at Our Lady of the Angels School, left many families physically and psychologically scarred for life, and destroyed a close-knit working-class neighborhood. This is the moving story of that fire and its consequences, written by two journalists who have been obsessed with the events of that terrible day in December 1958. It is a story of ordinary people caught up in a disaster that shocked the nation. In gripping detail, those who were there—children, teachers, firefighters—describe the fear, desperation, and panic that prevailed in and around the stricken school building on that cold Monday afternoon. But beyond the flames, the story of the fire at Our Lady of the Angels became an enigma whose mystery has deepened with time: its cause was never officially explained despite evidence that it had been intentionally set by a troubled student at the school.

The Third Coast
by Thomas Dyja

A cultural history of Chicago at midcentury, with its incredible mix of architects, politicians, musicians, writers, entrepreneurs, and actors who helped shape modern America Though today it can seem as if all American culture comes out of New York...

On September 1, 1894 two forest fires converged on the town of Hinckley, Minnesota, trapping over 2,000 people. Daniel J. Brown recounts the events surrounding the fire in the first and only book on to chronicle the dramatic story that unfolded. Whe...

A surreal, lyrical work of narrative nonfiction that portrays how the largest domestic oil discovery in half a century transformed a forgotten corner of the American West into a crucible of breakneck capitalism.As North Dakota became the nation's s...

At midday on May 4, 1970, after three days of protests, several thousand students and the Ohio National Guard faced off at opposite ends of the grassy campus commons at Kent State University. At noon, the Guard moved out. Twenty-four minutes later, ...

City of the Century
by Donald L. Miller

The epic of Chicago is the story of the emergence of modern America. Here, witness Chicago's growth from a desolate fur-trading post in the 1830s to one of the world's most explosively alive cities by 1900. Donald Miller's powerful narrative embrac...

A moving true story of American struggle.Royal, Nebraska, population eighty-one—where the church, high school, and post office each stand abandoned, monuments to a Great Plains town that never flourished. But for nearly twenty years, they had ...

Terror in the City of Champions
by Tom Stanton

The Children's Blizzard
by David Laskin

January 12, 1888, began as an unseasonably warm morning across Nebraska, the Dakotas, and Minnesota, the weather so mild that children walked to school without coats and gloves. But that afternoon, without warning, the atmosphere suddenly, violently...