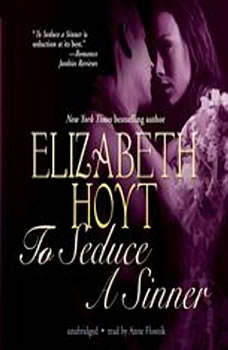 To Seduce a Sinner

The one thing he cannot reveal to the one woman he most desires is his deepest need. Jasper Renshaw, Viscount Vale, has a problem: he needs to marry and produce an heir to the title. All Jasper wants is to find a lady who will put up with him long enough to wed so he can retreat to his life of debaucherya life that keeps the haunting memories of his past at bay. Knowing that Jasper is under pressure to wed, Melisande Fleming grasps her fate with both hands and volunteers to marry him. Although Jasper is initially interested only in producing an heir, he soon becomes entranced by his wifeprim and proper by day, wanton by nightand vows to learn her secrets. Melisande, however, is determined to keep her husband at a distance. She has lovedand lostbefore and will do anything to keep him from learning her terrible weakness: shes secretly been in love with him for years. But to her chagrin, her husband pursues her, wooing her as if she were a paramour, not his wife. As Melisande and Jasper embark on a passionate game of cat and mouse, secrets from the past begin to resurface threatening to tear them asunder.

The Leopard Prince
by Elizabeth Hoyt

THE ONE THING A LADY MUST NEVER DO...Wealthy Lady Georgina Maitland doesn't want a husband, though she could use a good steward to run her estates. One look at Harry Pye, and Georgina knows she's not just dealing with a servant, but a man.IS FALL I...

To Sir Phillip, with Love
by Julia Quinn

Sir Phillip knew that Eloise Bridgerton was a spinster, and so he'd proposed, figuring that she'd be homely and unassuming, and more than a little desperate for an offer of marriage. Except . . . she wasn't. The beautiful woman on his doorstep was a...